Today’s poetry practice is a new form to me. It is called the trenta sei- which bacically means thirty-six. It has thirty-six lines, six stanzas of six lines each.The first line begins the first stanza. then the second line of the first stanza is the first line of the second stanza. And then you take it from there. There is a a ababcc rhyme scheme. John Ciardi, the poem is based on a quote he is alleged to have said about women poets always wearing their ovaries on their sleeves. (Imagine steam emitting from my nostrils. Yep, that was my reaction.) Today’s poem takes his form and responds to the alleged commnet about women poets.

Featured image is from Andelino’s Weblog

One of the reasons I was inspired to become a poet involves Sylvia Plath. Indirectly. But really, this is about remembering that my elder sister was a writer. A poet. And shared my gender.  In a time in the sixties when you would be hard pressed to find many woman poets in anthologies my sister was a walking, talking, frequently irritating but also motivating factor in my knowing that it was okay for a woman to write.  And you didn’t have to kill yourself over it.

Sylvia Plath has loomed large in my creative formation partly because my sister was working on one of the first MA thesis on Plath’s poetry back in 1970 when Plath was barely seven years in the grave and I was barely a teenager.    Plath, along with Anne Sexton, were the contemporary woman writers that were in college syllabus in the 1970s when I was at university.  I’d open my college text on American poetry and literally count the women who were included.  There was Amy Lowell (lesbian), Plath (suicide), Emily Dickinson (recluse) and Anne Bradstreet (professional Puritan wife).  If you didn’t fit into any of those categories then it often felt lik 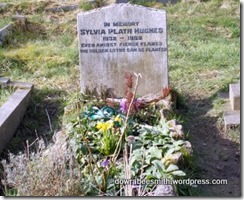 e you were making it up as you went along.

I knew I did not want to grow up and be like Sylvia Plath. But I did write poetry from age eleven.  I still wanted to write poetry.  But I felt I owed it to Sylvia Plath to make a pilgrimage up to her grave.  In a kind of reverse role modelling she helped mould me as a writer.  Her life embodies many of the contradictory tugs and shoves and pulls on a creative woman’s life: children, marriage, domesticity, equal partnership and creative partnership. Virtually all women who write have confronted those life elements and made choices, compromises and confronted conflict of interest.

I made the pilgrimage to Heptonstall parish churchyard to visit Plath’s grave. It lies in the newer cemetery  behind the parish church, across a cobbled lane.  I begin to quarter the cemetery, scanning for a 1960s style headstone.  I find a Greenwood with the surname an odd echo of Plath’s Bell Jar alter ego.  A local woman walking a ancient Golden Labrador comes into the graveyard. I ask if she knows which section I should be looking in for Plath.  She very hospitably leads the way, chats the exact number of minutes for politeness sake and then leaves me to pay my respects.

Crocuses are blooming on the grave. There is a pile of coins that have been left on top of her headstone.  Jewish custom would have one leave a pebble but wherever this custom originated I added my own twenty euro cents to the pile.

At bedtime I leaf through one of the Lumb Bank’s library books (no sign of Ted Hugh’s Birthday Letters on the shelf).  It’s a Bloodaxe anthology Modern Women Poets. I have tattered copies of some of the 1970’s first anthologies of women poets, obviously with a strong American bias. The publishing climate has changed considerably since then and the UK poet laureate is  a woman.  Reading Elizabeth Bartlett’s poem “Stretchmarks” the bitterness over the discrimination women poets and writers faced in the late 20th century drips off the page.  I am reminded of the quote ascribed to John Ciardi (who was a tutor at Breadloaf Writer’s Conference when my sister attended) disparaging those women poets who “wrote with their ovaries on their sleeve.”

Women can choose to write and not be mad, bad, sad or dangerous to know.  It can be a strategy for sanity and life affirming and for the higher good of many. It can be a moral choice, too.  Although since poets always seem to be the first political prisoners to be sent off to the gulag perhaps all poets, regardless of gender, are a little dangerous to know.

Bee Smith is travelling in March 2014 with the Leonardo da Vinci Life Long Learning Programme “Developing Creative Practice Across Borders” to Yorkshire and Lancashire organised by the Cavan Arts and the Social Inclusion Unit offices.