The theme for today’s #30DaysOfSummerWritingChallenge is ‘We are Sailing.’ Now I have never been on a yacht. I am awkward getting in an out of small crafts. But I adore ferries. Nor do I get seasick (which was one reason why my husband demurred on taking a trip to Orkney with me. One epic bout of seasickness back in the 1970s has forced him to avoid lengthy boat crossings. The shortest is always the best. Even then he keeps his head down while I roam the deck.) So the Poetry Daily is inspired not by my first experience of a ferry; there had been two cross-British Channel trips before the one that I am memorialising in the Poetry Daily today. The route the Poetry Daily poem takes was Stranraer in Scotland to Larne in County Antrim, Northern Ireland. The year was 1980.

Interesting that I am writing this ‘up north’ where we travelled to attend the first of what could be quite a few 70th birthday parties for handsome man that grew up in the Country Armagh.

I am playing fast and loose with the NaPoWriMo2019 prompt for today. “Today, I’d like to challenge you to write a poem that starts from a regional phrase, particularly one to describe a weather phenomenon.” I have a cracker of a regional phrase, one from County Armagh, Northern Ireland. Which makes this very GloPoWriMo2019 and gives me a chance to vent about Brexit.

“Shar me hay-ed” is what it sounds like. This translates as “shower my head”. Or could even be used as “go shower your head.” It’s more to do with internal weather than external low and high pressure systems. My late sister-in-law came over to us in England from Armagh back in the late 1990s for her fiftieth birthday to “shar me hay-ed.” With a hard Brexit looming and living in border lands we may all be needing to go shower our heads more frequently. In a little over a week I will be escorting a group of school childrenthrough a sliver of territory that will cross international boundaries twice. This is just to take them for a guided walk in Cavan Burren Park, which is part of a cross-border global geopark. It’s supposed to be a fun day out during a Easter Holiday School doing arts and crafts.

I just realised I may have to pack my passport since I don’t have a photo ID driver’s licence. I have to ride on the bus to fulfill the mandatory number of adults for Child Protection Policy.

The point is that nobody knows what all the implications will be. To have called a referendum without a plan was just plain wicked and so disruptive of millions of lives. Blast Brexit! We all need to go shower our heads over this. 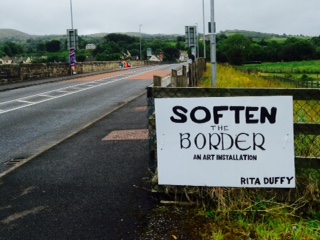 I have always had a certain ambivilance bordering on antipathy to flags. Flags are territory markers, symbols of possession. They are also a way of saying you are either in or out. If you are one of us you are welcome; everyone else ‘Scram!’

Flags are ugly things to me. We aren’t dogs that need to mark territory to find our way home.  To some, flags may be a symbol of belonging, but really they are also symbols of exclusion.

Living close to the boundary with Northern Ireland and, having ‘married in’ with a native of that part of the world, I know all about flags. Mercifully, those flags have become less prevalent since 1998, but there are still neighbourhoods that fly the tribal colours and we know that we can never belong. There are certain times of year where certain neighbourhoods are avoided while they have their annual tribal rites.

And seeing that profusion of tribal colours incites an unease. American-born I can go anywhere, but there are areas where  my husband would immediately feel unwelcome, uneasy if not threatened. It’s got much better, but the point is that those symbols are potent and they can instill fear, anxiety, terror.

I want to ban all flags. Because all are, in a sense, flags of convenience, ways to oil the wheels of power over, to profit the few at the expense of the many. They are symbols drenched in blood and suffering. Some glory in that sacrifice of human life. The truth is that there is never glory, only a trail of grief generation upon generation.

Resistance is more important than ever. Tribalism is pushing its unmasked face into ours. And how can you respond non-violently?

I live near to the border with Northern Ireland and there is much discussion about whether Brexit will mean that we go back to the  ‘hard border’ days prior to the Peace Treaty that created a renaissance in this region, much of it funded by the EU. No one here wants to go back to the days of delays crossing the border, customs checks, military presence.  No one wants a hard border.

A bridge between the villages of Belcoo, Co. Fermanagh (Northern Ireland) and Blacklion, Co. Cavan (Republic of Ireland) is an international boundary. During the annual summer fair an art installation by Rita Duffy was mounted right on the international boundary line. “Soften the Border” used soft furnishings and knitted work (and The Markethouse in Blacklion is host to many avid crochet and knitting sessions) to make a symbolic point.

And there was not Union Jack or Tricoulour in sight. On one side was a small purple blanket. The other was crochet granny squares. 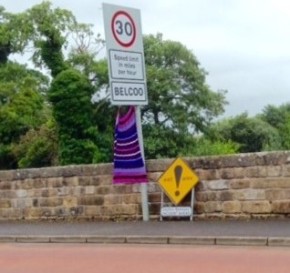 No tribal colours or sabers or drums. This region has had enough of that to last three lifetimes and it brought a great deal of destruction, sorrow, heartache, depopulation and emigration, and economic decline.

They embraced this idea of peace, reconciliation, coexistence, respect. You don’t have to like everyone and their beliefs, but if you want a civil society without violence you need to suck it up and not rub your neighbour’s nose in something that will make them afraid, defensive and reactionary.

Which is why symbols of triumphalism of any kind, whether it is a flag or a statue of some supposed ‘hero’, have to go if we want to walk the talk of ‘love thy neighbour.’ Integration has a long way to go in the North, but over twenty years people have found common ground, most recently in the stand against fracking operations moving into the cross-border region.

Softly, persistantly, with craft, intelligence and wit, people can unite and resist without violence.

If there must be flags, let them be wooly and soft, symbols of nurture and cherishing, warmth and welcome.

We need icons like this sculpture in Blacklion that looks across Lough MacNean to Fermanagh. We need symbols of hope that inspire us to keep walking the talk, no matter how imperfect our efforts  may be.