Today’s poem commemorates a century since the ending of ‘the war to end all wars.’ Which hasn’t happened again and again and again worldwide, in civil disputes, freedom fights, and far ranging involvements that have resulted in more war and less peace.  Remembrance Day 2018 salutes the fallen who served when called. But on this Remembrance Day I also want to be thankful for those conscientious objectors, many of whom I met when they were in their 80s and 90s back in the last millenium.  I knew COs who served in the merchant marine in both world wars. I knew those who served in the Friends Ambulence Unit. I knew those who did social work in the bomb ravaged East End of London as alternative service. I even knew a CO who was a jail bird. Rather than parlay his engineering reserved occupation status, he went to Stangeways Prison and rewired their electrics. I remember them today.

The poem’s title is inspired by a project a Quaker friend of mine participated for this Remembrance Day. She was here last summer and crocheted numerous white poppies to create wreaths of remembrance for those who suffered the collateral damage of war. You can find out more about this Peace Pledge Union project  here.

The white poppy has become the pacifist way of remembering on the 11th of the 11th month each year. I am remembering with a poem that was also in part inspired by a BBC documentary where a German World War I combatant described how his first kill affected him forever.

The featured image is a photograph I took in Litchfield Cathedral last April. In a side chapel they had an exhibit on the first World War. This sculpture calls to mind the many (about 300 if my memory of one statistic floated is serving me correct) shell-shocked soldiers who were executed for ‘funking.’ I remember those men, too, today.

Lest we forget poppy seeds flung on far

fields…and how war strips the patina off

them that Enemy is not a human.

Killing is nothing personal so long

as it is wears the other uniform.

One who knew the trenches, spoke, remembered

the moment he saw the eyes of the man

he bayonetted. How strangling, beating

and stabbing were their day’s work. No problem…

except he still woke some nights in a sweat,

haunted by that Frenchman’s eyes, his hand, which

otherwise he would have taken and shook.

Then there were the ones who came home broken –

even after Armistice, those absent

while sitting around the dining table.

There were Dads who each Christmas disappeared

down a bottle, refighting the Battle.

There were ones who drove family away.

Home is for the civilised, not combat.

Let us not forget the shell-shocked comrades

Lest we forget survivors who escaped

bombs and bullets in cellars. And rape. Or not.

The victor can spoil. They’ve lost the shellac.

It leaves a wildness in the blood and bone.

I mourn war’s waste of civilisation.

Lest we forget the price of peace, the cost

in collateral damage when compared,

is colossal. One hundred years on now

we pay in survivor guilt and fears,

that has altered generations’

Truly that is the business of war.

All are forever lost. Lest we forget.

I discovered this photo on Facebook in a post by Nikki Phillips of an art installation by Jackie Llandelli of Ghost Soldiers overlooking their memorials in St. John’s Churchyard, Slimbridge, Gloucestershire. 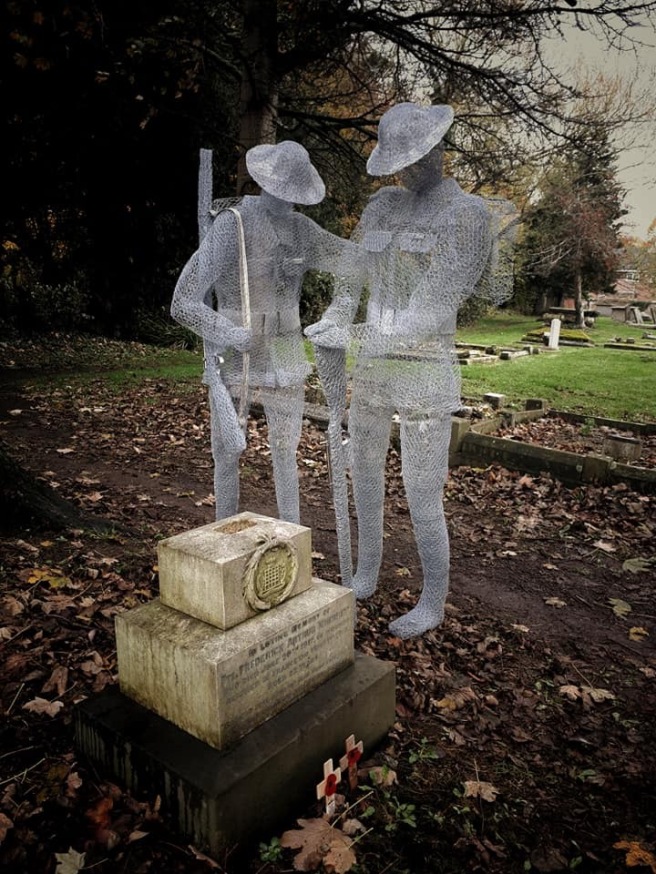