Day 5 of NaPoWriMo has more of a GloPoWriMo theme. The prompt is all about translation and I very nearly wimped out on this prompt. You are  meant to take a poem in a language you don’t know,  and add in a photograph.  And then write about the photo modeling your language on the original un-translated version. My head exploded!

Just to clarify, this is the exact wording of today’s prompt.

Today, we’d like to challenge you to write a poem that, like the work in Translucence, reacts both to photography and to words in a language not your own. Begin with a photograph. Now find a poem in a language you don’t know (here’s a good place to look!) Ignore any accompanying English translation (maybe cover it up, or cut-and-paste the original into a new document). Now start translating the poem into English, with the idea that the poem is actually “about” your photograph. Use the look and feel of the words in the original to guide you along as you write, while trying to describe your photograph. It will be a bit of a balancing act, but hopefully it will lead to new and beautiful (and possibly very weird) places.

Ideally, we are supposed to choose a poem from an unfamiliar language. Here I cheated some, eventually going for a short German poem.  I have forgotten more German than I ever knew, since I last haunted a beginners class in 1975. I looked at other Germanic languages, but the translations were side by side the original in the online examples I checked out, which felt like a bigger cheat temptation. So I decided to grab a bi-lingual Rilke from my bookshelf. I also have some Nuala ni Dhomhnaill, but Irish sounds nothing like it looks and my head had another melt down. So Rilke it had to be.

And since I was getting a headache I decided to cut myself some slack and ‘put a dog in it’ as suggested on Day 4’s NaPoWriMo prompt. I had a perfect moody black and white of Ellie at Corry Strand last autumn.

You watch harbour side

You zig zag, hurrying, then resting

in mud and  cloudy mist

and you bark (I listen out)

for what you see, your flotsam gift.

We go, making a groove in sand

and free from vilification

for spying , your ear flicks.

But I cannot say that I am proud of this effort. I can only say that I did not opt out, which I frequently did last year. And sometimes you just have to push yourself out of the comfort zone. This was distinctly uncomfortable.

But to get to a point where I could even try today’s assignment, I had to haiku . I wrote one to another photo, which was taken from a bridge not far from the source of the River Shannon. It was glorious springtime and I was with Cavan BirdWatchers. 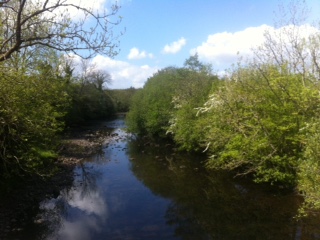 Bee Smith facilitates creative writing workshops, with experience with all age groups and in men-only and women-only groups. She lead haiku walks in Northwest Ireland. If you would like to information about workshops and events and would like to be added to the mailing list please fill in the contact form.