My creative colleague, Morag Donald, and I have been leading art and creative writing workshops with a Foróige youth group in Templeport, Co. Cavan since January. This was just one group taking part in the Cavan Youth Arts Lab, of which there are ten across County Cavan with approximately 150 youth getting a chance to try out and play in various artistic disciplines. The Cavan Arts Office initiative received EU funding through Peace IV, part of the ongoing funding in cross-border communities that has oiled the mechanics of peace and reconciliation after the Thirty Years conflict ended with the Belfast Agreement on Good Friday, 10th April, 1998. Rural border towns were especially impacted by that conflict in many ways too lengthy to enumerate in this blog post.  Here we are twenty years on, approaching Good Friday, still doing the healing work.

Templeport, Bawnboy is also a Geopark Community, with sites of importance for Marble Arch Caves Global Geopark (another monument to cross-border cooperation, founded in the wake of the Belfast Agreement.) Morag and I proposed a project allowing the group to try out a range of arts and crafts, story and poetry that they would be unlikely to encounter in school.  We took as our thematic touchstone ‘Landscape and Heritage.’  PEACE Cavan Youth Arts Project Facilitator Kim Doherty matched us with a Foróige group of 12-14 year old girls. We met them in evening sessions and one daytime in Templeport Community Centre and had a day long outing in Cavan Burren Park, Shannon Pot and a workshop in Dowra Courthouse Creative Space. Because as far as I am concerned you cannot have a project on land without getting outdoors.

Over the course of the first quarter of 2018, ten young women gamely tried out lots of new stuff. In the first session I asked them if they related more to words or pictures. Most felt more comfortable with visual media, but they also courageously tried out words. And I do mean courageous. One young woman when asked how she felt about writing a poem said, “Terrified!” And she was being dead honest. But, to her credit, she felt the fear and did it anyway!  And it didn’t really hurt at all in the process – a bit to her surprise.

We started with giving them journals to collage and keep a record of their own work and thoughts.

Morag Donald, a certified tutor in Touch Drawing, gave them a taste of this way to express themselves using this unique technique.

Morag holding up some finished product 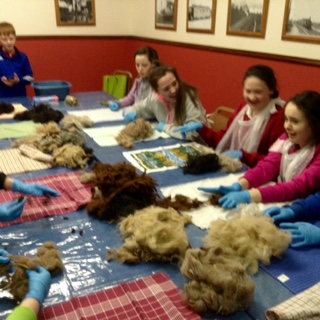 First, call your friend who has some alpaca wool going spare. Then, encourage girls to get over the animal aroma pre-washing.  Next, wash it, roll it, pass it around! Felt making is a truly communal and co-operative operation.

But weaving offered each individual the opportunity to weave in her own contribution as part of a greater whole.

For the words part of the project I chose ‘The Lost Words’ as a theme. This harks back to a poem of my own (Lost Worlds) inspired when I read that many words describing natural phenomena were being dropped from the Junior Oxford English Dictionary. Now, for these young women living in a rural setting, conker and bluebell are still very real and known. But for urban children those words deemed ‘irrelevant to modern childhood’ won’t have either a memory or a reference. So it seemed important to impress that these girls had a unique place in being the storykeepers of some of the lost words. In our final session they each chose a word as theirs to keep. For Emma, who dipped into the tin and picked kingfisher, it seemed absolute kismet since they have some kingfishers close to her home place.

Story is a way of communicating our heritage. On our day out on the Cavan Burren and Shannon Pot, in my Geopark Local Guide guise, I shared the folklore of the turlough and rocks, the swallow holes and megalithic tombs with them. Then, at Shannon Pot Tony Cuckson, my husband, shared with them the story of how the Shannon Got Its Name From a Girl.

In the workshop after lunch in Dowra Courthouse Creative Space I encouraged the girls to write short haiku to accompany some of the photos taken on their phones.

The Japanese poetry form also lends itself to collaboration when you create a renga. A haiku is made up of three lines of seventeen syllables. A tanka is a haiku with two more lines of seven syllables each. A renga is a series of linked tanka. Mind mapping is a real help when you are working on these.

Part of collaboration is about listening to others. From the very beginning we borrowed the Native American tradition of using a talking stick. This teaches each person to respect the person talking who holds the stick. By holding the stick you actively draw attention and people really listen to your words. You learn not to interrupt and to show respect for what everyone has to say. We made a talking stick for the girls to take back to the larger Foróige group in Templeport. After discussion, Rachel was elected as Talking Stick Keeper for the one they  made during the project.

In our final session we wove our lost words into the collective weaving. Then, using two of the lost words, ash and wilow, the girls made a frame for the weaving and mounted their needle felt pictures.  The bottom right needlefelt piece is a collaboration three girls initiated to create a single piece.

We also created a traditional wishing tree using felled branches. The group was asked to write out a wish or blessing – three lines beginning as follows:

The cloutie tree, or wishing tree, derives from the Gaelic for the word cloth. Since cloth and textile had played such a large part of the project it seemed fitting to end it with the group adding ribbons and lace along with their wishes, which we had printed on to cloth so they could tie it on. There was great sweetness and heart in their blessing wishes.

And this was my own wish.

May you always see the beautiful light inside you

May I always honour the beautiful light in everyone

And what did the girls learn? Well, some of the comments on the feedback sheets made these statements.  “I learned that I was unique.” “I learned that I have some imagination.” I learned about communication skills and listening.”  “I learned I could be creative.” And any of those are all really helpful skills for peace-building in the future.

One thought on “Weaving Art in the Geopark”