My blog schedule is a bit disrupted. But you try leading four workshops within seven days and nursing sciatica on the ‘off ‘ days! I did actually draft this blog twice, but each time the iPad crashed and I lost the draft.  But maybe the universe was telling me I needed some crash time of my own! Third time lucky on the trusty steam laptop. And besides, in the interim one of the haiku walk workshop participants sent me some lovely images and haiku she wrote on the day. Morag Donald has kindly given me permission to share them with you here. (But you might also want to visit her WordPress blog over at Morag Donald Reiki Master & Teacher).

It was Irish Tree week last week and the snow and sleet earlier on had yielded to mist and soft rain and a practically balmy 6C! Those of us living in Fermanagh and Cavan, the lakeland counties in Ireland, are well equipped to deal with most weather eventualities. So my band of hardy haiku poetree walkers arrived well dressed for the occasion.

We met at Marble Arch Caves Global Geopark Visitor Centre. Many of you know I am also a local Geopark Guide. And in March 2018, that has roared in like a lion, I am being intrepid enough to host two outdoor poetry events in Marble Arch Caves Global Geopark. This first, with a haiku walk down lush Claddagh Glen, was an appropriate venue for celebrating all things arborial in Irish Tree Week.

And here is the haiku that Morag wrote, inspired during the walk.

Along with a tiny notebook, a camera of some sort is often a boon for a haiku walk anywhere.

Haiku celebrates our natural heritage, as well as our relationship with nature. No more than seventeen syllables, the traditional  Japanese poetry form is often seen in three lines of 5-7-5 syllables. But in English that can sometimes feel a bit stilted, so the format has altered somewhat. A seasonal word to anchor the reader in the wheel of the year is also traditional.

As we drove up over Marlbank to Marble Arch Caves Centre, I composed a haiku of my own

Through the mist and the mizzle

Although on our haiku walk down the glen it wasn’t sheep we spotted, but some rather splendid antlers on feral goats. They were both too shy and too quick to take a reasonable photo, but here is a haiku snapshot.

It is true that aroma of goat announced their presence on the opposite bank of the Claddagh River.  My own jotting at the time:

And my! The way they were scrambling along a thirty-five degree angle was an impressive sight. Sure-footed is no exageration. They were practically balletic! 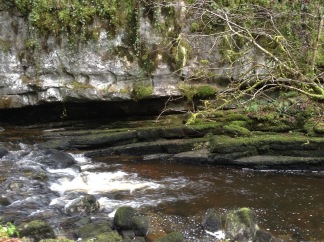 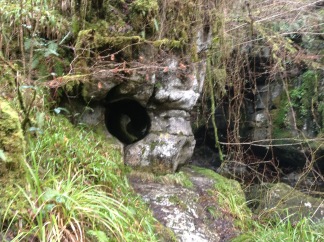 This is their habitat – rock, river, trees. Claddagh Glen is one of my favourite walks. They have an expression ‘to shower my head.’ Which actually sounds more like ‘shar my hay-ed.’  Which translates as getting your mind clear. Whenever I see the  Cascade along the path I feel like I am showering my soul.

Haiku walks – or ginko – are ideal opportunities to ‘shower your soul’.  The Japanese practice something that translates as ‘forest bathing’. A haiku walk in scenic splendour has a similar replenishing effect.  I will be planning more in 2018 in and around Marble Arch Caves Global Geopark. If you would like to take part in one, please fill in the contact form below, letting me know when you will be in our part of Ireland.