I have always had a certain ambivilance bordering on antipathy to flags. Flags are territory markers, symbols of possession. They are also a way of saying you are either in or out. If you are one of us you are welcome; everyone else ‘Scram!’

Flags are ugly things to me. We aren’t dogs that need to mark territory to find our way home.  To some, flags may be a symbol of belonging, but really they are also symbols of exclusion.

Living close to the boundary with Northern Ireland and, having ‘married in’ with a native of that part of the world, I know all about flags. Mercifully, those flags have become less prevalent since 1998, but there are still neighbourhoods that fly the tribal colours and we know that we can never belong. There are certain times of year where certain neighbourhoods are avoided while they have their annual tribal rites.

And seeing that profusion of tribal colours incites an unease. American-born I can go anywhere, but there are areas where  my husband would immediately feel unwelcome, uneasy if not threatened. It’s got much better, but the point is that those symbols are potent and they can instill fear, anxiety, terror.

I want to ban all flags. Because all are, in a sense, flags of convenience, ways to oil the wheels of power over, to profit the few at the expense of the many. They are symbols drenched in blood and suffering. Some glory in that sacrifice of human life. The truth is that there is never glory, only a trail of grief generation upon generation.

Resistance is more important than ever. Tribalism is pushing its unmasked face into ours. And how can you respond non-violently?

I live near to the border with Northern Ireland and there is much discussion about whether Brexit will mean that we go back to the  ‘hard border’ days prior to the Peace Treaty that created a renaissance in this region, much of it funded by the EU. No one here wants to go back to the days of delays crossing the border, customs checks, military presence.  No one wants a hard border.

A bridge between the villages of Belcoo, Co. Fermanagh (Northern Ireland) and Blacklion, Co. Cavan (Republic of Ireland) is an international boundary. During the annual summer fair an art installation by Rita Duffy was mounted right on the international boundary line. “Soften the Border” used soft furnishings and knitted work (and The Markethouse in Blacklion is host to many avid crochet and knitting sessions) to make a symbolic point. 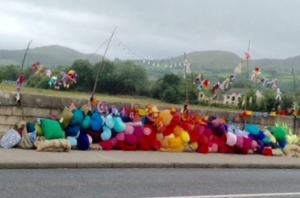 And there was not Union Jack or Tricoulour in sight. On one side was a small purple blanket. The other was crochet granny squares.

No tribal colours or sabers or drums. This region has had enough of that to last three lifetimes and it brought a great deal of destruction, sorrow, heartache, depopulation and emigration, and economic decline.

They embraced this idea of peace, reconciliation, coexistence, respect. You don’t have to like everyone and their beliefs, but if you want a civil society without violence you need to suck it up and not rub your neighbour’s nose in something that will make them afraid, defensive and reactionary.

Which is why symbols of triumphalism of any kind, whether it is a flag or a statue of some supposed ‘hero’, have to go if we want to walk the talk of ‘love thy neighbour.’ Integration has a long way to go in the North, but over twenty years people have found common ground, most recently in the stand against fracking operations moving into the cross-border region.

Softly, persistantly, with craft, intelligence and wit, people can unite and resist without violence.

If there must be flags, let them be wooly and soft, symbols of nurture and cherishing, warmth and welcome. 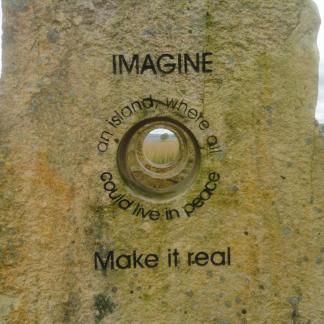 We need icons like this sculpture in Blacklion that looks across Lough MacNean to Fermanagh. We need symbols of hope that inspire us to keep walking the talk, no matter how imperfect our efforts  may be.

3 thoughts on “We Need to Talk About Symbols”