Where do poems come from? (This is about as loaded a question as where babies come from, but potentially less embarrassing.) I thought I would share where the inspiration can be sourced and then show you the poem that resulted from said source.  The example is the poem “Inish”  (Irish for island), which I wrote after a boat trip to an island off the Sligo coast back in August 2015.

Inspiration and writing both have allies in observation. Notice things. Look. See. Listen. Hear. Touch. Feel. Feast. Taste.  Every sense is quivering to offer you something to prime the writing pump.

So I am going to share some photos I took that windswept day, bundled up in my husband’s thickest sweater. 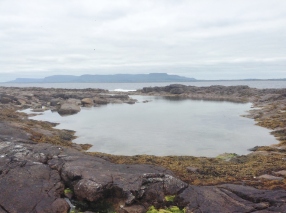 Inishmurray inlet. The boats go from Mullaghmore harbour. There is no jetty. You have to leap at the auspicious second onto a rocky promontory.  It is an object lesson in the leap of faith. 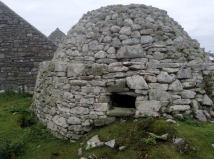 Inishmurray was a monastic site, but also had families living there until it was evaculated in the 1940s, when the population had dwindled to an unsustainable level.

Brady family members created this monument to their island lineage on what had been the family homeplace.

This is the poem published in Irish publication Skylight 45 in January 2016.

On an island you are always surrounded.

Not a bad thing – not necessarily, not always,

not even when lashed, cornered by southwesterlies,

the sea the colour of a gun, rock outcrop a citadel,

wind keeping you beyond reach.

From their front porch before their eyes

drowsily sexy with the mountains ranging

to her north and south standing guard.

They have a bit of bog, a bit of grazing,

for cursing, for blessing, doing the double;

a diet of dread and angelic awe.

How could they not come home again

forty years beyond their leaving, bringing back

the Brady nieces and nephews to show them

what was missed and missing.

On an island you are always be surrounded.

So get out and about in your world. Inspiration is the next seashell you see. Or a piece of litter you pick up. Flotsam and jetsam are inspiration’s buddies. It doesn’t need to cost any money at all. It does take time, attention and intention.